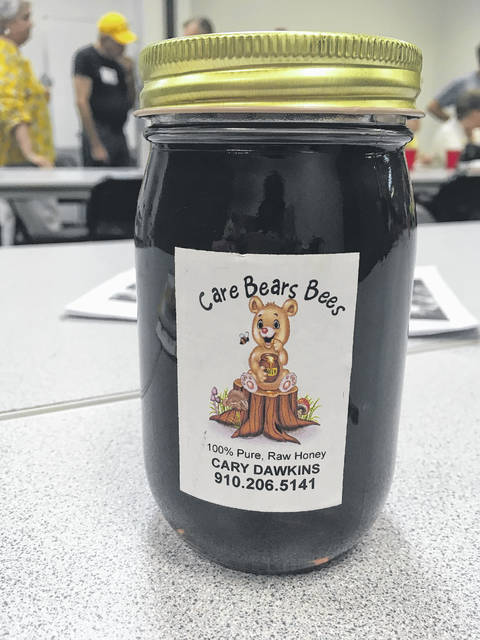 Beekeeper Cary Dawkins took a jar of blue honey to Richmond County’s Beekeepers Association monthly meeting to learn more about how it’s made. Some of the beekeepers have seen their bees produce blue honey and shared theories. Still, it remains a mystery. - Jasmine Hager | Daily Journal

HOFFMAN — Beekeeper Cary Dawkins grew up on a farm with honeybees but never got into beekeeping until around four years ago. Earlier this month, he went to extract honey from his hive and noticed it was darker than usual.

Dawkins said he didn’t think much of it and put the slab with the honeycomb into his hand-cranking machine to extract the honey, and then let the honey sit in a tub so the bubbles could rise before he jarred it. He went out of town and had a friend watch over things while he was away.

When he returned to fill his jars, he saw that his honey was an unusual color.

“You’ll be shocked at what you got,” Dawkins remembered his friend telling him when he returned home. “You have blue honey!”

Dawkins had seen blue honey before, but this was his first time bees in his own hives had produced it.

“I’m honestly not sure” how it happened, he said.

So he took his honey to the monthly meeting of the Richmond County’s Beekeepers Association this week, to show the 31 attendees his honey and to ask how it gained its peculiar hue.

But the other beekeepers were puzzled, too.

Blue honey tends to be made within the Sandhills region of North Carolina, which includes Richmond, Cumberland, Harnett, Hoke, Lee, Montgomery, Moore and Scotland counties, said president David Aumon, who has sold purple honey from his own hives near Derby.

But he had good news for Dawkins. Even if he doesn’t know where the blue cast comes from, the honey can make him a little green.

“There was a guy on eBay who sold jars for $10 an ounce,” Auman said. That’s the cost of a whole jar of typical golden honey.

Auman cited several theories surrounding blue honey and how it’s made, including bees forging from berries, kudzu plants and sourwood trees. Some blogs claim blue honey has a grape taste to it and could be made by bees forging on grapes.

Auman disputed most of those theories, favoring the sourwood tree idea himself. Although …

“I’m fine with not knowing,” he said.

Dawkins said blueberry bushes grew near his home, but he didn’t think they were the cause since the bees can’t puncture the fruit.

“It’s around June or July when people tell me they see blue honey, and that’s when the huckleberry bush is there,” she said. “Some other insects, like a wasp, puncture the fruit, and the bee will suck it up and then bring it back to the hive. And it doesn’t take much of the juice to turn the honey blue.”

Ruppert also has seen blue honey in her hive and theorized that the bees brought nectar from a vineyard half a mile away.

“I have always found blue honey to be delicious, and it has a fruity taste,” she said. “That’s why I have a theory that it might be from fruit.”

But all in all, Ruppert said she hadn’t met a beekeeper who complained about oddly colored honey.

“It’s very exciting,” she said. “They can’t predict when it’s going to happen.”

And just because your bees make it one year doesn’t mean they will make it again.

“The mystery is that no one knows how it’s made,” said Dwight Young, a beekeeper in Moore County.

Apparently for Dawkins, a mystery it shall remain.