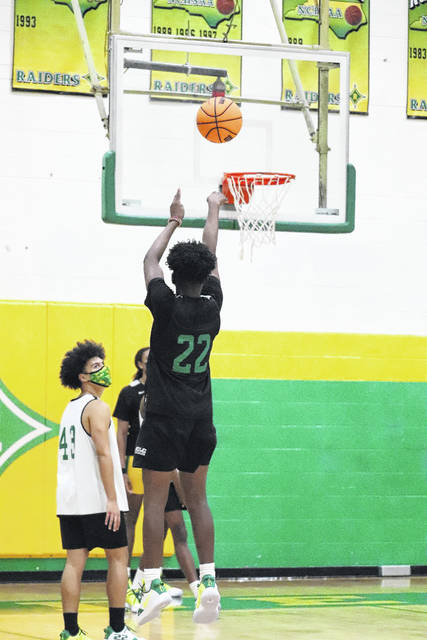 The Raiders work on jump shots during a drill in practice Monday afternoon. 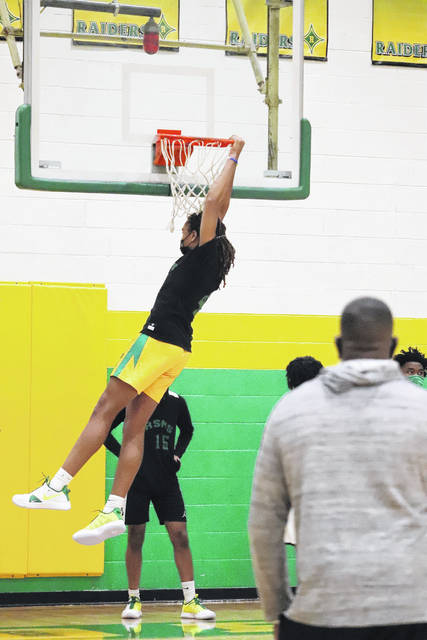 Senior wing Nygie Stroman hangs on the rim after a dunk during practice Monday afternoon. 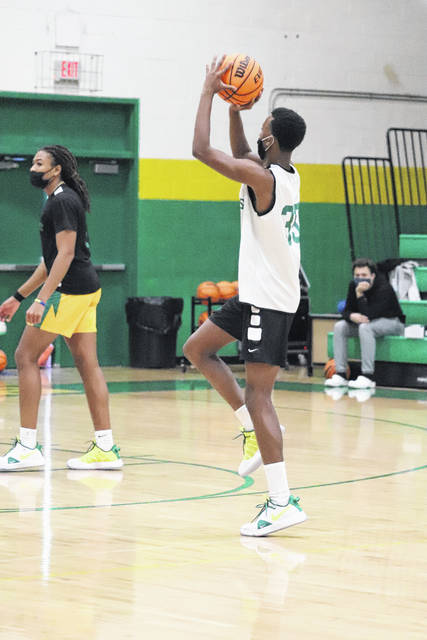 ROCKINGHAM — The memory of former player Jalen David is on all of his teammates’ minds as the Richmond Senior High School boys’ basketball prepares and competes this upcoming season.

“He was a part of our family – it was tough losing him,” said head coach Donald Pettigrew. “We think about him every day. He helped to turn this program around. He was a big part of it. We’re playing for him.”

To honor David this season, Pettigrew said the team got t-shirts and shoes with the initials “J.D.” and the No. 22 on them. He added that before their season opener Tuesday night at Purnell Swett, the team will stop by and visit David’s gravesite before the game.

After finishing the 2019-2020 regular season third in the Sandhills Athletic Conference standings with a 10-4 SAC record and a 20-9 overall record and as runners up in the conference tournament, Pettigrew said the Raiders have their sights set on winning the conference championship this year.

The Raiders will likely have their work cut out for them to accomplish that goal, after Lumberton and defending conference champion Pinecrest both made it all the way to the final four of the state playoffs last spring.

“Nygie is a three-year starter, all-conference player,” Pettigrew said. “Ever since he got in the program, we’ve been winning. Patrick McLaughlin, he’s a solid point guard – tough, crafty and he’s a leader. Dylan played a lot last year, but this year he’s playing with so much confidence and he’s going to be a surprise for everyone this year.”

Pettigrew will also welcome two talented freshmen into the fold this year in guards Paul McNeil and Jamarion Wall.

The season starts Tuesday, but the Raiders have already won some hardware. At the end of October, the Raiders won the inaugural 9 Dime Fall League championship against several Fayetteville-area teams, including 30-0 and defending 3A state champions Westover, and then won the inaugural Norton Classic in a preseason game against Pine Forest.

Pettigrew said he feels the team’s success in the offseason competition gives the them a lot of confidence heading into this season.

“We played some good competition in Fayetteville, teams like Westover, some private schools,” Pettigrew said. “Playing against them, and they have some high profile players, and the guys seeing that they can compete with anybody helps their confidence a lot.”

Pettigrew added that the team has been focusing on getting better defensively during practice so far.

”Offensively, I think it’s going to take care of itself,” Pettigrew said. “We got some young guys, and we’re trying to hold them accountable for what we do and learn how we play defense.”

One of the biggest changes that the Raiders and all high school basketball teams across the state will have to deal with this year is the mask mandate. Like it did for volleyball, the state is requiring players and coaches to wear masks during practice and during games, even on the court. Pettigrew said he thinks his guys will be fine adjusting to wearing a mask during games.

“We’re happy we get the opportunity to play,” Pettigrew said. “We might not be playing, so we have to do whatever we have to do to play and stay safe at the same time.”

To support the Richmond County Daily Journal, subscribe at https://www.yourdailyjournal.com/subscribe.