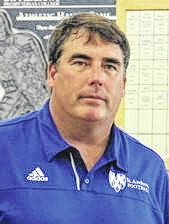 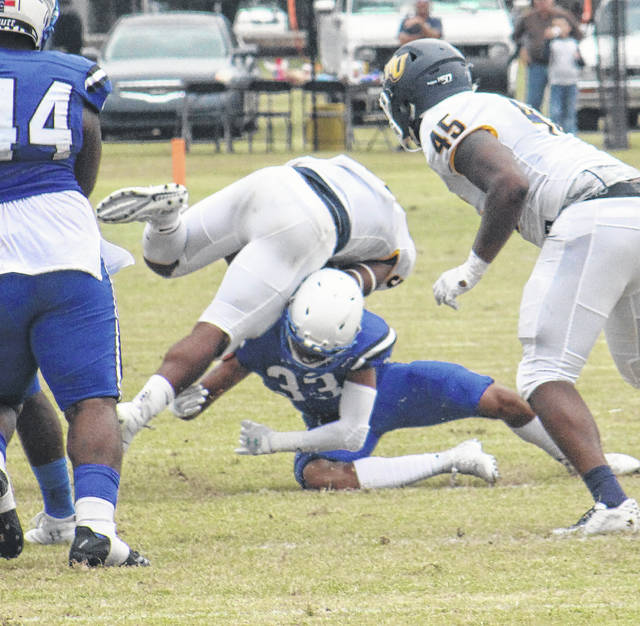 Brandon Tester | Laurinburg Exchange file photo St. Andrews defensive back Demarche Hilliard (33) makes a tackle during a football game last year. The Knights have had to adjust their spring workout plans because of the COVID-19 pandemic. -

LAURINBURG — In just three seasons of existence, the St. Andrews University football program has faced its share of growing pains and setbacks.

Perhaps none of those challenges have been as challenging as the one the Knights are facing right now: How do you prepare for a fall football season that may or may not happen, while not being able to have much in-person contact with your players?

That’s the question head coach David Harper and his staff have been pondering over the last several weeks. The NAIA, the college athletics association of which St. Andrews is a member, decided in March to cancel the remainder of its spring sports season. That change didn’t cost the SAU football team any games; the Knights wrapped up their 2019-20 season in November. But rules concerning social distancing and mass gatherings have prevented the Knights from holding their annual spring workouts in a traditional manner, and those sessions are always critical.

SAU’s coaches have resorted to Zoom video calls as a way to relay information to their players.

In those meetings, the coaches are operating on the assumption that the season will start on time in August. They’ve been working on installing plays, imparting knowledge and getting players adjusted to new positions. None of those things are easy without in-person interactions, Harper said, especially because the Knights have had some coaching changes over the offseason. One of those moves was the departure of defensive coordinator Bill Young, who took the same position at UNC-Pembroke, a local NCAA Division II program.

Workouts have also been affected by the coronavirus shutdown. Coaches have sent out workout plans to their players; the honor system governs whether or not the players complete their exercises. Harper said many players are sending in photos and videos of their workouts.

“You just have to trust them,” Harper said. “They’ve got to grow up and make good decisions.”

Harper knows not all of his players have the same resources for workouts. Some have equipment at their homes, and others have to rely more on push-ups, crunches, and other equipment-free routines.

“What you don’t gain is that mass when you lift heavy weights,” Harper said. “That mass gets you through your season.”

That could be an issue in the months to come. But the situation with the feasibility of collegiate athletics is still fluid, so the Knights are preparing for anything.

“My biggest concern is the safety and welfare of the players,” Harper said.

As the next several months progress, the Knights will also stay on the recruiting trail, albeit virtually. Harper said they Knights have met with some recruits over Zoom. That process comes with its own set of challenges, but Harper knows those difficulties aren’t unique to his program.

RAEFORD —After a split decision from coaches and media at last year’s Sandhills Athletic Conference Media Day, the Richmond Senior football team walked away from Bayonet Golf Course at Puppy Creek with a knockout on […]

ROCKINGHAM — Those lucky enough to be at Raider Stadium on Friday night were treated to a play most see only on television. A dazzling display of athleticism, speed and power that is nearly unheard […]

C. J. Tillman has been named the Daily Journal’s Athlete of the Week for Sept. 30-Oct. 5 Tillman is a junior for the Richmond Senior varsity football team where he starts at outside linebacker. In […]