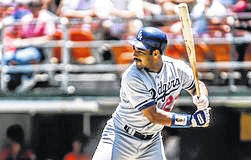 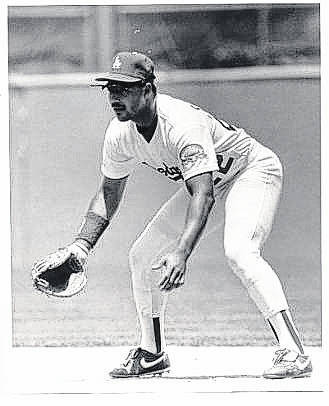 The name “Franklin Stubbs” is relatively well-known in and around Richmond County. Arguably the most successful baseball player to hail from our area, Stubbs enjoyed a 10-year career in the major leagues before moving into coaching at the professional level.

Although born in Laurinburg, Stubbs considers himself to be from Hamlet, having played Bronco League (Yankees) and middle-school ball here while working the family farm off of Highway 38 south of town. “That’s home,” Franklin Stubbs said during his playing days in Los Angeles, “And it will always be home.”

Franklin credits three people in particular for his success. Having lost his father, Lee Stubbs, in an automobile accident when Franklin was only a year old, it was left to his mother, Betty, and his grandmother, Katherine Davis, to provide the nurturing and guidance for his personal life. But the development of the baseball life of Franklin Stubbs must be attributed, at least to a significant degree, to Coach George Whitfield.

“The most influential person in my life is George Whitfield,” Stubbs said during a 1986 interview. “He has been a father figure to me. When we go to Atlanta and he brings his family down, I say, ‘That’s my family.’ ”

Of course, all of Richmond County can take pride in the athleticism and career of Franklin Stubbs. Coached by Whitfield during his days at Richmond Senior High School, Stubbs was an integral part of the NCHSAA 1979 state championship team as well as that year’s American Legion state champion.

It was during that American Legion championship series that Stubbs set a record which still remains. Pitching in all four games (two as a starter and two in relief), he was credited with the win in all four of them.

Franklin went on to star in NCAA Division I play at Virginia Tech, becoming the Hokies’ first All-American in baseball. As a sophomore first baseman in 1981, he tied the existent NCAA Division I record for homers in a season with 29, leading the Hokies to a 48-9 season with a .417 average, 83 RBIs, 59 walks and 34 steals in 37 attempts. Stubbs completed his collegiate career with 59 homeruns in three years before being the Dodgers’ number one draft choice in 1982.

He also helped Team USA win the gold-medal in the 1981 Intercontinental Cup, defeating a Cuban national team that had not lost a major tournament in two decades.

Drafted by the Los Angeles Dodgers in the first round of the 1982 amateur draft, Stubbs developed his game for two years in the minors before “getting the call” to the big time in 1984.

That year he played in 87 games, hitting around .200 with eight home runs. Although the 1985 season was less than productive, by 1986 he was established as a regular in the Dodger line-up.

He struggled at times, hitting only .226 with a high strikeout ratio. But Stubbs showed signs of significant power, belting 23 homers while offering solid defensive performances in the outfield.

After a series of trades, the Dodgers found themselves in need of a first baseman, and Franklin Stubbs was their guy. Moving to first seemed a better fit with his approach to the game and he continued to grow as a player, leading the National League in fielding percentage (.994) in 1987.

Then the magical year of 1988 arrived and Franklin Stubbs showcased his skills in the World Series (yes, the same one in which Kirk Gibson hit the walk-off homer in Game 1). Batting almost .300 while hitting in the second spot behind leadoff man Steve Sax, Stubbs had five hits (two of them doubles) in 17 at-bats as the Dodgers defeated the Oakland Athletics in five games.

The latter part of Stubbs’ career was characterized by a series of free agency signings and related moves. Granted free agency status by the Dodgers in 1990, he signed with the Houston Astros, Milwaukee Brewers and Boston Red Sox before playing a year (1994) in the Mexican League. In 1995 the Detroit Tigers brought Stubbs back to the states where he hit a respectable .250 for Sparky Anderson’s club before retiring as a player.

Franklin continued his affiliation with major league baseball by entering the coaching field. Hired as a coach in the Atlanta Braves organization, Stubbs assumed a role with their Danville affiliate in 1997 before being promoted that squad’s manager in 1998. He then served in various capacities as a Braves’ minor league hitting instructor through the 2008 season. Stubbs went back to the Dodgers as a coach from 2009 through 2015 before moving to the Arizona Diamondbacks network where he remains today as a coach with the Hillsboro Hops.

Honored on the Hamlet Wall of Fame, one of his baseball jackets is on display in the Visitor Center.