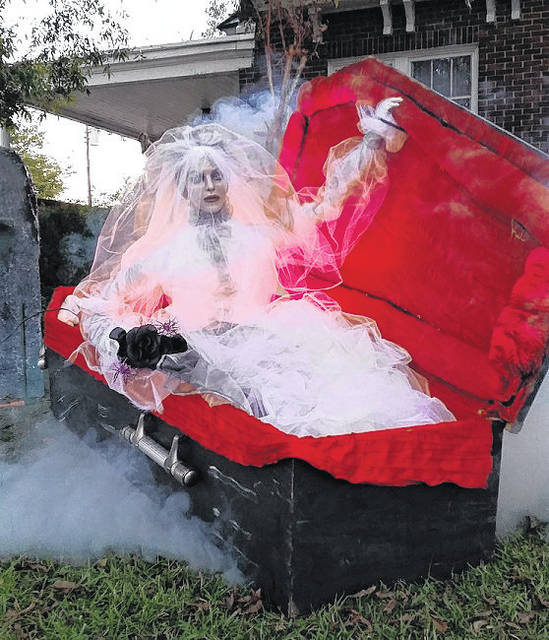 Michael Gamber’s extensive Halloween decorations include this coffin given to him by Carter Funeral Home.

HAMLET — One of the Hylan Horror’s heavy-hitters has bowed out of the street’s Halloween festivities this year because of COVID-19.

Michael Gamber announced on Facebook Tuesday that, while he will still decorate his house, he will not be participating in trick-or-treating and will not host the annual Halloween ball. Gamber moved to the street about 13 years ago and it was already an area that took the holiday seriously, and over the years Gamber applied his musical theater background to take the horror to another level.

Hylan Avenue has become a major attraction for the area each year, virtually filling the entire street and creating near should-to-shoulder traffic along the road all Halloween night.

“Considering the direction of the pandemic with no vaccine by October and for the safety of ourselves, for the general public and for local healthcare and police force we will not be participating in 2020 Trick-or-Treat this year,” Gamber wrote. “Our annual Halloween ball is also off the table – and that’s too bad because it was planned to be the one NOT to miss.

“We will decorate, of course,” he continued. “But spread the word that Hylan 201 is bowing out.”

The decorations include a 3-D projector, hyper-realistic coffins with corpses rising out of them, gargoyles, a graveyard, and other decorations and effects that borrow from classic horror films. Gamber encouraged the regular visitors to the area to keep their kids home this year, though they may offer attractions for drive-by viewing.

“Introduce (your kids) to house-held family Halloween parties,” Gamber wrote. “That’s where our inspiration comes from.”

The rate of new positive cases of COVID-19 has nearly doubled nationwide since early June, according to an analysis by the New York Times. Reports have indicated that the earliest time a vaccine could be ready is early 2021.

Anthony Bristow, the man behind the Skyline Horror on Skyline Drive in Rockingham, another of the county’s most popular Halloween stops, hasn’t decided whether he will cancel his annual decorations.

“I’ve definitely been considering the possibility of having to cancel however I think it’s still a little too early to decide,” Bristow said Wednesday. “I’ll obviously do whatever is necessary to comply with local restrictions. My main focus is on providing a safe environment for trick-or-treating.”

Bristow is holding out hope that there can be a safe way to keep the tradition alive.

“The good thing about Halloween is that it’s the one day of the year that people don’t actually mind wearing a mask, so maybe we can make it work,” he said.

Interest in guns has spiked since March

ROCKINGHAM — The amount of gun permits Richmond County Sheriff’s Office issued in from April to June was 261.8% more than the amount issued over that same period in 2019, a trend that local weapons instructors say is partially due a growing feeling of unease stemming from social unrest.

For many Americans, the initial reactions to seeing images on the news (or even occasionally in an American airport) of seemingly young and healthy people – usually from Asian countries – wearing protective masks in public places was mostly negative. They included:

HAMLET – As a result of their respective disabilities, many special needs and exceptional students require unique, specialized instruction in order to provide them with an effective education.