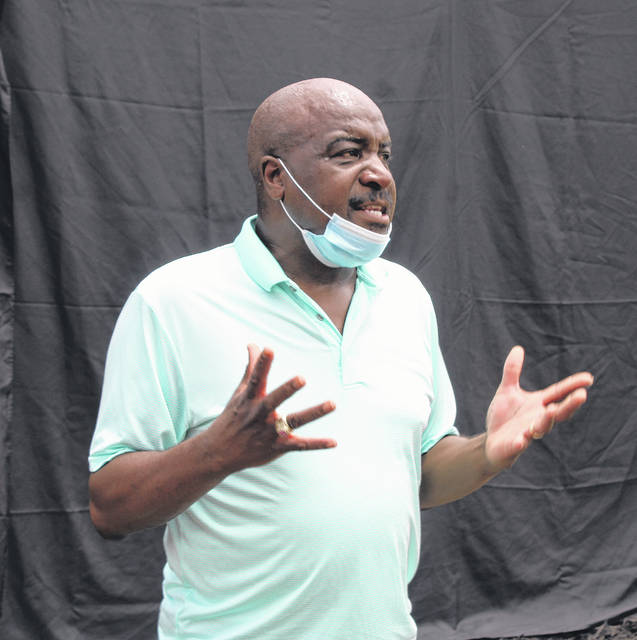 “I thought about kids playing freely, feeling free, able to know that their life matters …” — Annie Renee Harden, one of the artists behind the mural

DOBBINS HEIGHTS — Two “homegrown” artists, who had never worked together before, brought a mural to life over the last two weeks that will serve to memorialize the Black Lives Matter movement and what all black children need: the safety to play freely.

The mural takes up the entire Earle Franklin Drive-side of the pool house at the Dobbins Heights Community Park. It shows silhouettes of children climbing on the playground equipment, playing basketball and swimming in the pool with the words “BLACK LIVES MATTER” emblazoned between them. The playground equipment forms the initials “BLM” and at the top are pictures of victims of police brutality and racial violence that have catalyzed the movement: Ahmaud Arbery, Breonna Taylor, George Floyd, Sandra Bland, Trayvon Martin, and Michael Brown.

The idea for the mural was sparked after a march in Dobbins Heights earlier this month in remembrance of Floyd, who died while in police custody on May 25. Mayor Antonio Blue and Mayor Pro Tem Tyre Holloway were on the same page after the march: putting up a mural in the town would be a great way reflect the national moment locally. Blue had Holloway find the artists, while Blue donated funds to the landscaping of the area around the mural.

“What we’re trying to show is that we’re unified in everything that’s going on,” Blue said, referring to the worldwide protests that have raged over the last month. “We need to realize that racism is a learned behavior … we’ve just got to figure out what to do so people don’t learn it.”

On the movement, Holloway told those gathered in the park, “All lives matter, but for all lives to matter black lives have got to matter too.”

“That’s not slighting anybody, we are all human, we all bleed the same blood,” he said.

Holloway sought out the help of his cousin, Dobbins Heights-native Annie Renee Harden, an artist and the head of the Mechanical Engineering Technology program at Richmond Community College, for help on the mural and introduced her to Jayla Jasper-Anderson, 25, also a Dobbins Heights native who recently earned her Bachelor’s of Science in Public Health Education from UNC Greensboro.

Holloway said drafting Harden, on the suggestion of his wife, was a “no brainer.” He asked her on a Wednesday, Harden accepted on that Thursday, and she had a template to him by Friday evening.

“It was an honor,” Harden said after the unveiling. “I think I cried for a while because I never imagined this. I always want to think of something to give back to the community because they have imparted so much in me and when I was approached I just knew I had to do it.”

Harden sought to tie in the park with Black Lives Matter to show the youth that they matter, and that they don’t have to “settle for anything.”

“I thought about kids playing freely, feeling free, able to know that their life matters so they don’t have to have worries when they come out and then I thought about how when we have unity our kids are able to see positivity and see that there’s freedom everywhere they go,” Harden said.

When Harden was a child, the Community Park was just a “dust field” where she had watched her mother play softball.

“Over time, seeing the growth (of the park) made me feel so overwhelmed and proud,” she said.

The project was a step out of the norm for both artists. This was Harden’s first mural; she primarily does portraits, jazz paintings and incorporates 3-D printing into her work, while Jasper-Anderson usually works with charcoal pencils rather than paint.

“When they said we were painting I was a little hesitant,” Jasper-Anderson said. “Once we started working together it all came together.”

Harden called Jasper-Anderson a “marvelous artist” and said she looks forward to working with her in the future.

“This is going to be a lasting relationship because me and her work awesome together,” Harden said.

Watching the unveiling, Hamlet City Councilman Maurice Stuart thought back to the stories his father, Maurice Stuart Sr., told him about growing up in the 1960’s in the North Yard, as Dobbins Heights was once known.

“He walked these streets and he talked to me for years and years about the injustices and systemic racism … and those stories from back in the 60’s taht he experienced, we’re seemingly experiencing the same things in 2020 which is disheartening,” Stuart said. “I’m just excited that the community came together and is working together and understands that all lives matter, but right now there’s just a feeling that black lives don’t.”