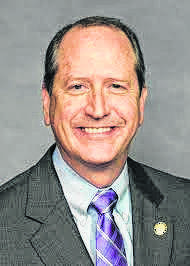 WASHINGTON, D.C. — On Monday, Richmond County’s congressman presented a bill to cut federal funding to states and localities that allow autonomous zones to exist for more than seven days.

Autonomous zones are communities which have deemed themselves separate from the presiding government that formerly controlled the area. In June, demonstrators protesting for police reform in the wake of George Floyd’s death while in police custody established an autonomous zone — named the Capital Hill Autonomous Zone (CHAZ) or Capitol Hill Organized Protest (CHOP) — in a six-block area of Seattle’s Capitol Hill neighborhood.

CHAZ’s existence will soon come to an end, as Mayor Jenny Durkan recently said that it was time for the protesters to leave the area. That announcement came after several shootings happened within the zone. Several other groups throughout the country have attempted to establish autonomous zones. Bishop said Seattle’s autonomous zone — and the violence that took place within it — motivated him to push for change.

If the bill is approved, government entities — states, U.S. territories, or political subdivisions such as cities or towns — that permit the existence of an autonomous zone for more than seven days would be cut off from federal funding until they reestablish eligibility by disbanding the autonomous zone. They would also need to submit a report to the attorney general detailing how they disbanded the autonomous zone and how they intend to prevent the establishment of outer autonomous zones.

Bishop said that his bill, if signed into law, would cause “very serious contemplation of sacrificing order for the sake of wokeness.”

“If we were able to pass this legislation, as a practical matter I don’t think another city anywhere would allow this particular form of disorder,” Bishop said.

The “disorder” Bishop spoke of includes the autonomous zones as well as the removal and demolition of monuments around the country, two topics Bishop said are interconnected. Some of the monuments commemorated parts of the Confederacy, but not all of them did. For example, a group of protesters, in Portland, Oregon earlier this month defaced and tore down a statue of George Washington, which they said they did because Washington owned slaves.

“Core figures in American history of the most admirable kind are being targeted for destruction,” Bishop said.

In Asheville, protesters recently tried to establish an autonomous zone but law enforcement officers quickly dismantled it. Bishop applauded Asheville police and authorities for how they handled the situation.

Bishop is calling for bi-partisan support of his bill.

“That is unacceptable in America,” he said, referring to autonomous zones and the destruction of monuments. “I don’t recognize that America. I am going to do everything within my power to fight that threat to our civilization.”

The latest action taken on Bishop’s bill was a reference to the House Committee on Oversight and Reform on Monday.

WASHINGTON, D.C. — Congressman Dan Bishop (NC-09), whose district in the U.S. House includes Richmond County, has partnered with Sen. Joni Ernst to request an official investigation into how many tax dollars have been used to support or clean up autonomous zones.

There is likely no better way that the tension over the Confederate monument in downtown Rockingham could have ended.

Letter | VA and protesters are failing our veterans