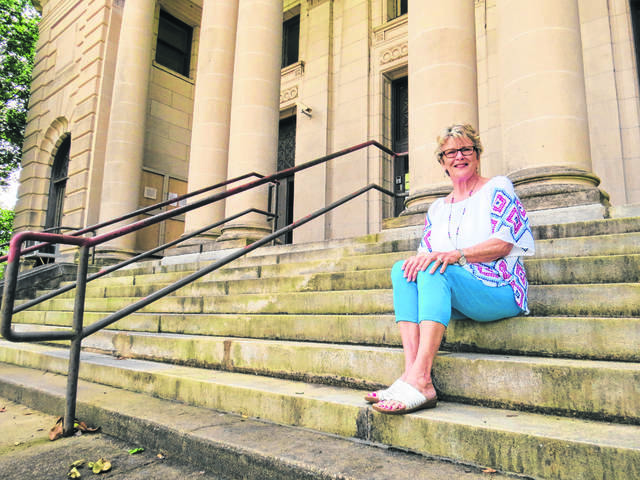 File photo Cathy Wilson, former clerk of Superior Court and chairwoman of the National Day of Prayer Committee, sits on the steps of the old courthouse in downtown Rockingham in April 2019 ahead of the 26th annual National Day of Prayer. The event was one of the many ways she impacted the community in her life.

ROCKINGHAM — Richmond County has lost one of its longest-serving clerks of Superior Court and a champion of the faith community.

Cathy Wilson passed away at the age of 72 on Monday, March 16. Originally from Roberdel, she was elected as clerk of Superior Court in 1986 and held the position until 2005. Those who rose through the ranks under her tutelage credit her with setting a standard for Richmond County’s judicial system that endures today.

Clerk of Superior Court Vickie Daniel said that, for the generation of clerks that still work in the office, Wilson instilled a value system that began with God, was followed by family, and then came the office.

“She always kept those things in order,” Daniel said. “When Cathy passed, part of our heart went. That’s how much we loved her.”

“She ran a good office, she was just a good woman and a consummate politician,” Saunders said.

As a credit to her impact, her former colleagues in the sheriff’s office and courthouse lined West Franklin Street as her hearse passed by, an unexpected gesture that, at least for now, takes the place of a full celebration of life which would likely far surpass the crowd capacity allowed under the recent restrictions put in place due to the COVID-19 pandemic.

“They were all in the street and that meant so much, we did not know they were going to do that,” said Chief District Court Judge Amy Wilson, Cathy’s daughter. “It was very touching.”

“Mama would have loved that,” said Allison Farrah, Cathy’s daughter and pastor of First Baptist Church of Hamlet.

The immediate family held a private burial ceremony last week, and will announce a public celebration of life once the restrictions on large gatherings have been lifted.

Daniel said that Wilson’s staff would beg her, each time she came up for reelection or when the topic of retirement came up, to continue in her role. And she would listen. “She loved us that much,” Daniel said, and added that she treated her staff “like family.”

Yvette Potts, Cathy’s first hire when she was elected clerk of Superior Court, said she was “like a second mom.” Potts said she gave Cathy a nickname, “Inez” — which she said came to her while they were joking around one day — and it stuck. “Inez” often asked Potts to sing a hymn that goes, “let there be peace on earth and let it begin with me.” Potts said these words summed her up.

Saunders said Wilson’s sense of humor shined through when work was done. He said she would rib him for asking questions he knew he should’ve known the answers to in his early days in district court. “We were just good friends,” he said.

“(Wilson) never thought she was better than anybody, never treated anybody different. She never let her position or her wealth make her feel like she was above anybody,” Daniel continued. “She was on their level — she just had a way of reaching people.”

Wilson used to leave during her lunch break to go sing for senior citizens at a mill site in Norman, according to Daniel. When Wilson was elected as president of the North Carolina Clerk of Superior Court’s Association, she hosted their annual conference at the Rockingham Speedway where the attendees were allowed to drive on the track — a major change from the typical conferences which were held at resorts or the beach and which brought a positive spotlight to the county, according to Amy Wilson.

Cathy was chairwoman of the National Day of Prayer Committee for 26 years, holding a ceremony complete with choirs and local speakers who shared their faith journey on the steps of the old courthouse each year.

“Faith was a cornerstone of her life,” said Amy Wilson.

For Farrah, her mother was “the strongest person in my life.”

“She inspired me in my own calling into ministry and supported me wholeheartedly,” Farrah said. “She is best remembered as loving all people, regardless of race or socioeconomic status. She loved everybody and as a result many people loved her.”