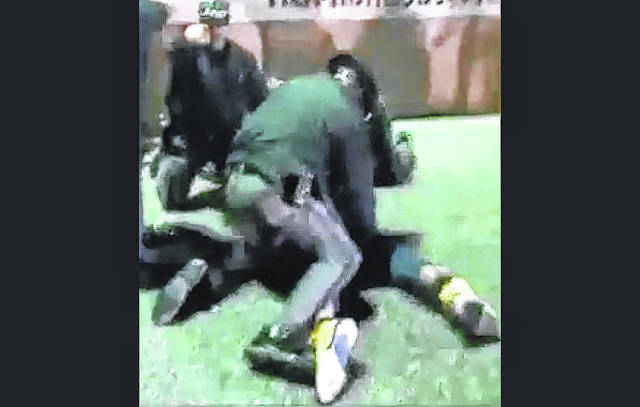 ROCKINGHAM — One of the officers involved in the arrest of Stephen Sings Sr. last Friday that caused an uproar after a livestream of the incident went viral has been placed on administrative leave — but the Richmond County Sheriff’s Office isn’t revealing which one.

Sheriff James Clemmons said the officer, who he declined to name, has not worked since Friday evening and was officially placed on leave Wednesday morning. Clemmons added that putting the officer on leave was not a punishment for any wrongdoing, as the State Bureau of Investigation is still reviewing the matter.

“I consider it an administrative move to ensure that the discretion of the investigation is pristine,” Clemmons said.

Sings was arrested and charged with two felonies and ten other misdemeanor charges after an altercation with a group of sheriff’s deputies at the Richmond Raider football game against Vance on Friday. Sings, of Charlotte, who is the father of a Vance player, approached a pair of deputies while livestreaming to ask why another of his sons had been arrested and charged with disorderly conduct earlier in the evening.

“Hey Officer Allen, now can you explain why you locked my son up..? What did he do wrong? I want to know,” Sings asks Lieutenant Damond Allen in the video.

“I don’t have anything to say to you,” Allen responded, adding, “This isn’t even open for discussion.”

Sings pressed the issue, saying, “This is your duty to talk to me,” at which point Allen hands another deputy his water bottle before reaching for Sings’ arms, ordering him to “put your hands around your back.”

The livestream has since circulated widely and a protest has been planned for Saturday afternoon in front of the old courthouse in downtown Rockingham, where the Richmond County Sheriff’s Office is located.

This story will be updated as more information becomes available.