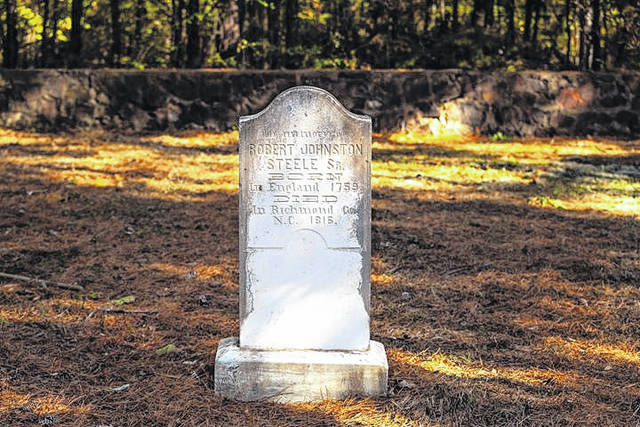 Contributed photo The gravestone of Robert Johnston Steele, Sr. The engraving shows that he was born in England in 1759 and died in 1816. 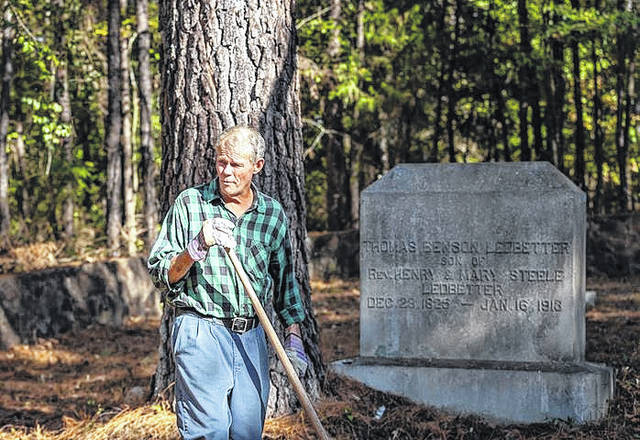 So, we have cemeteries as a record of the lives lived in a community. But what happens when a cemetery is forgotten? Lydia and Gene Sides, along with their neighbor, Jeff Cathcart, don’t want to see that day come for the the Steele-Ledbetter Cemetery down their road from their house, which is packed with the remains of some of Richmond County’s founding residents, and so for about the past month they have been sprucing up the small area and plan to keep at it for the foreseeable future.

“It was a crying shame to see the condition it was in,” Lydia said of the cemetery, located on the corner of Sides Road and Interstate 73. “No one seemed to be coming forward as far as descendants.”

The land is owned by Jordan One, LLC, a lumber company. The cemetery includes the remains of Robert Johnston Steele, Sr., who Lydia, an amateur family researcher, said was one of the founding members of Richmond County, and the namesake of the Steele #1 and #2 districts. According to Lydia, Steele was wounded in the Revolutionary War and stayed in North Carolina to raise his family after being nursed back to health here.

Steele died in 1816, according to his grave, and Lydia said his sons were part of the development of the textile industry that thrived in Richmond County for generations.

Other remains in the cemetery are multiple members of the Ledbetter family, and both Gene and Lydia said the most recent burial there was about 5 years ago.

“I don’t think anything has been done to it since” that last burial, Gene said. “Other than that it’s been left alone, but it won’t be hard to keep up now.”

The cemetery was overgrown with weeds and other vegetation, littered with debris, the stone walls around it were falling down in some parts, and the headstones had become dirty. Gene and Cathcart, along with Gene and Lydia’s son, Greg, cut back the vegetation, cleaned the headstones and are working to repair the walls.

The Sides family has no personal connection to the cemetery, other than trying to improve their community.

“Every time you pass it you’re going to say, ‘Well it looks good,’” Gene said.

Lydia said that she has had her own experience losing track of her family history because of being unable to find gravestones or records. The Sides family will keep the cemetery up for as long as they are able, and welcome anyone else who is willing to help. Anyone interested in volunteering can call the Sides family at 910-220-1241.

“I would like to see more people participate, somebody has to keep (the cemetery) up,” Lydia said. “We won’t let it get into the shape it was in.”