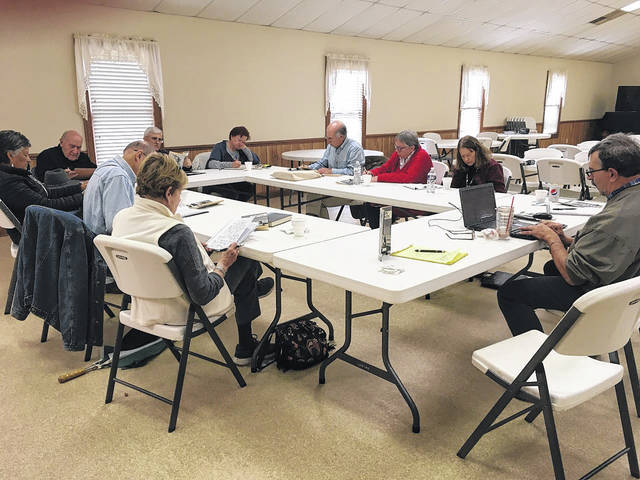 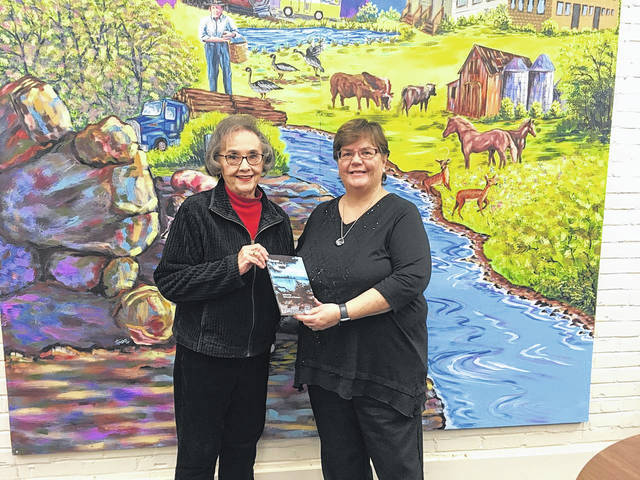 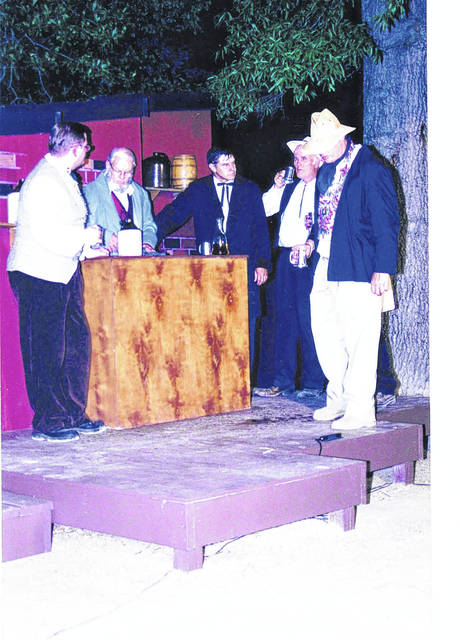 Picture taken from the ACWC production of Sneydsborough: A Ripple in the River 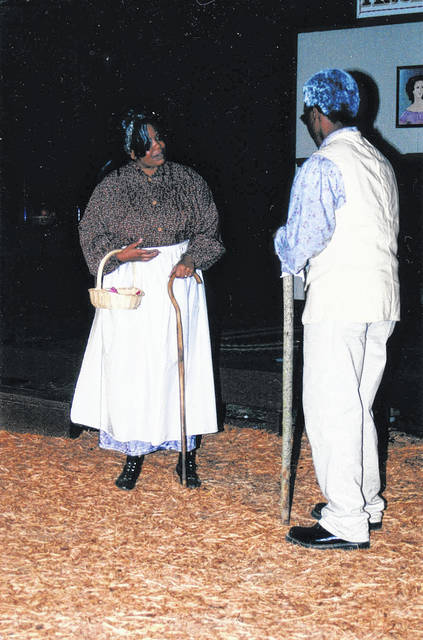 In 1991, ACWC proposed the idea of writing an outdoor drama about the vanished Anson County town of Sneydsborough.

WADESBORO- Sandra Bruney issued an open invitation to the citizens of Anson County on the pages of the Anson Record in Jan. 1989 that read, “Anson County writers interested in forming a support group are invited to meet in the Pritchett Room of the Hampton B. Allen Library (Jan. 29) at 3 p.m.” That’s how the Anson County Writer’s Club (ACWC) began it’s over 30-year history.

“I’ll tell you why we started the club in 1989. I was kind of a closet writer. I didn’t really want anybody to know I was writing,” explained Bruney, who added, “I had a chance to go to Duke University for a week’s residency. I took a week off of work, took money out of my savings account, said goodbye to my husband, and trotted off to Duke.”

That residency proved to be a life-changing event for Bruney. “When I walked in that dorm, where we were all supposed to meet down in the common room and saw all these people, I knew I found my tribe. I just knew it. These were all writers. They understood me. They got me. I just loved it. That whole week was just meeting people, talking about writing, breathing writing, and eating writing.”

It was upon returning home that Bruney wanted to recreate that experience of being among other writers, “I came home and it was like a detox. I said to myself, ‘Oh no, now what?’ That’s when I decided to see if there were any other people like me in the area so I put a little ad in the paper.”

The charter members of the newly-formed ACWC were Sandra Bruney, Helen Goodman, Helen Ingram, Mary Garris, Louise Thomas, and Bobbie Gathings. The number of members has grown since then and now includes 17 dues-paying members. Members come from as far away as Union County and South Carolina to meet on the last Sunday of every month at 3 p.m. at First Presbyterian Church in the fellowship hall.

The writers club has held a contest for both adult and youth writers in 1989. The first winners were announced in 1990. This was done with the help of a grassroots grant from the Anson County Arts Council and N.C. Arts Council. With the grant, the ACWC was able to sponsor the writing contest and provide both speakers and workshops that were open to the general public and club members.

The writing contest continues to this day. The ACWC sends out the winner’s letters in February and the award ceremony is held during that month’s meeting at the Little Theatre in the Hampton B. Allen Library.

“Everybody comes and reads their poem or part of their short story and gets a little public acclamation and recognition because we always put their picture in the paper. We have a reception afterward for their friends and family and have some goodies to eat,” said Bruney of the annual contest.

In 1991, ACWC proposed the idea of writing an outdoor drama about the vanished Anson County town of Sneydsborough. The research committee spent countless hours thumbing through reels of microfilm, library vaults, wills, and deeds. Bruney described the research process as, “a wonderful journey.”

Bruney would present a tentative script to the ACWC in August 1992. The name for the drama would be “Sneydsborough: A Ripple in the River” and, after scenes were added by Betsy Haskell, Helen Goodman, and Jinaki Hasan, the play would be performed for the first time in May 1993 on the football field at what was then Anson Junior High School (now Anson High School) to coincide with the Anson Arts and Heritage Festival and the Morven Homecoming Celebration.

“Somebody loaned us some flatbed trucks we used as sets. I can remember people were coming in and sitting down in the gym while we were still painting the sets. We were unorganized then, but we got organized. Then it moved to the amphitheater in 1995,” said Bruney. The amphitheater Bruney mentioned was the then newly constructed Helen Goodman Amphitheater which was funded from a grant from the N.C. Department of Cultural Resources.

The play is set in the time period from 1795 – 1865. “Sneydsborough, in the days the play was set, there was no way for people in the mountains to get their goods down from the mountains before the railroad. So, there was a plan to create a series of canals that would end up at Sneedsboro and end up in Fayetteville to the Cape Fear River. That fell through, but Sneedsboro was a major hub and a major canal. The canal still exists. It’s on the property of Buchannan Shoals,” said Bruney, who added, “If they had succeeded in building that canal, it would be a major hub. Sneydsborough would be as big as Charlotte.”

“A fever spread, it’s unknown if it was typhoid or typhus. They blamed it on the cottonseed that they thrown in the river. A lot of people then pulled out and went to Mississippi or Texas. We have a lot of people from those states who come to Anson County to research their families. Sneydsborough just declined. An interesting note, though, it’s still on the books as a town because Neil Jones was a representative at that time, about 30 years ago. He brought it up in the assembly and they voted to keep it as a town. There’s still a sign there even though nobody lives there,” explained Bruney.

“We did the play for 10 years and it got to the point where you couldn’t get volunteers. We depended on volunteers so much for everything I got really disgusted with one of the key players. The last night we were doing it, he upset his mother and she grounded him. I tried explaining to her that we need him. After that, I said ‘I’m not doing this anymore,’” said Bruney.

Once “Sneydsborough: A Ripple in the River” had run its course, Bruney and the ACWC turned their attention to holding an annual writer’s conference entitled The Carolina’s Writer’s conference. The first one was held in April 2009 at South Piedmont Community College in the Lockhart-Taylor Center.

They held the conference for ten years and featured authors ranging from Lee Greenwood, known for writing westerns such as the Seven Bride series and The Cowboys series, to science fiction author David Drake and faith-based writer Michelle Buckman.

The ACWC no longer holds the Carolina Writer’s Conference. Instead, they now focus on presenting writing workshops every year in November. The last workshop was on American poetry and was presented by Joseph Bathanti. Bathanti is an American poet, novelist, and professor at Appalachian State University in Boone, North Carolina. He was named by Governor Beverly Perdue as the seventh North Carolina Poet Laureate.

“Joseph was our first writer in residence of what was then Anson Tech, in the community college system. He has a volume of poems called Anson County. He’s remained very close. There’s a video that we gave to the library of Joseph going to Sneydsborough, going to the old places he lived,” said Ratliff.

In addition to the workshops, the ACWC has also presented Back Porch Stories since 2012. “It’s a storytelling event we do in April. We started doing in conjunction with the conference, on Friday night before the conference on Saturday. When the conference ended, we decided to keep doing Back Porch Stories.” said Ratliff. The storytellers have included the likes of the Anson Record’s own columnists Leon Smith and J. A. Bolton.

It’s safe to say that throughout its over 30-year history, the ACWC has achieved its mission and shows no sign of slowing down anytime soon. 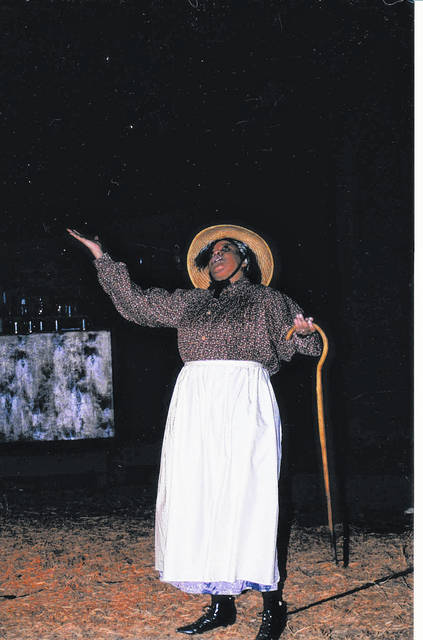